About The Location: Situated on the coastline of Valsad, Daman (a union territory) is divided into two areas, Moti Daman, split by the Damanganga River. After the Portuguese successfully infiltrated Goa, they searched for a coastal territory in Gujarat to conduct trade. They landed in Daman, and in 1531, the Gujarat Sultan agreed to hand the territory over to the European power in exchange for a share in their customs revenue. The port thrived in trade and was more important than Diu for the Portuguese. Daman became part of the Indian Union in 1961.

The town is worth a day trip if you are interested in seeing the lingering influences of Portuguese colonialism, especially in Moti Daman. The beaches, however are far from paradise and often packed with drunken local tourists who flock to this popular drinking destination. Of the two former Portuguese territories touching Gujarat, Diu is no doubt the more attractive destination.

The imposing Moti Daman Fort was built from 1559-93 over an area once occupied by a small Muslim citadel. It spreads over three hectares in a polygonal layout. Just outside the fort is Church of our Lady of the Remedies, built at the begining of the 17th c. Although outwardly simple, the interior is stunning with golden cherubs, rose petals and excellent woodwork. The Badrapore District retains a Portuguese influence in its winding lanes and small house.

In Nani Daman, the Fort of St. Jerome, completed in 1627, covers 12 ha with a striking gateway facing the river. A statue of St. Jerome crowns the entrance with two imposing human figures standing guard. You can walk along the ramparts and get a view of the surrounding area. Another prominent building is the church of our Lady of the Sea. The local claim that an underground passage connects this fort to the one in Moti Daman. 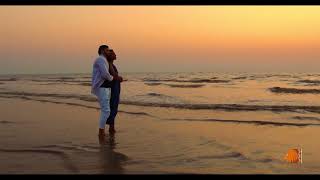